January Global Faculty of the Month

Dr. Lisa Slevitch is the Spears School of Business Global Faculty of the Month honoree for January, as selected by the Center for Advanced Global Leadership and Engagement (CAGLE).

Slevitch hails from Saint-Petersburg, Russia. Growing up in what was originally the Soviet Union, Slevitch lived within the country during its transition to the Russian Democratic Government.

Contrary to many perceived thoughts from Americans, she said that growing up in the Soviet Union was very similar to growing up in the states. Slevitch says that primary school was similar to the U.S. school system, apart from the yellow school bus, and she enjoyed all the ordinary things that kids do growing up.

“After coming to the U.S. I realized some new things,” she said. “Growing up at times, all western counties were considered enemies. This changed as the country transitioned from the Soviet Union to Russia; however, I never experienced it until I came here. People were so nice, not as portrayed in Soviet media, and that made me truly realize that people are people everywhere.” 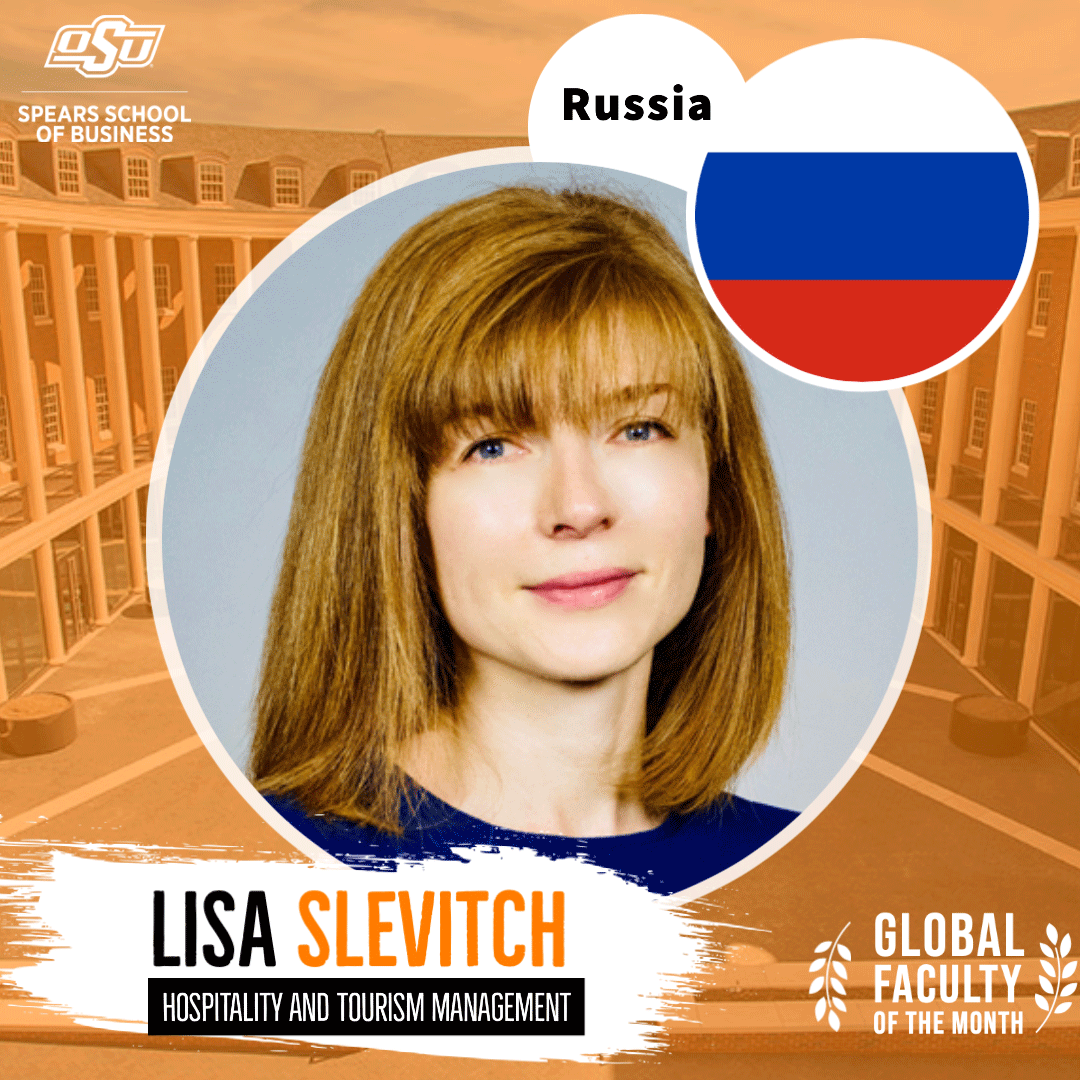 She remembers often eating traditional celebratory Russian meals in her childhood, such as Olivier salad, borscht, cured meats, and herring. In these regards, with the ability to try and taste almost any cuisine, it might come to be a surprise that Slevitch’s favorite food is one of the simplest pleasures... ice cream.

Dr. Slevitch enjoys the simplicity of the sweet dairy desert, which has been her favorite since she

was a child growing up overseas. Slevitch says in Russia, dairy products do not require the same pasteurization as in the U.S. and that is why they taste slightly different and come in a wider variety of options, which is something she misses while in the U.S.

“I wanted to get an MBA degree, and it was not possible in Russia; no universities offered it in the late nineties,” she said.

Slevitch pursued her post-graduate studies at Iowa State University, completing both her MBA and Ph.D. programs. She came to Oklahoma in 2007 after accepting a job

with OSU during her final semester at Iowa State, claiming she heard good things about the university.

“I really liked the people at the department,” she said. “However, they did not mention the Oklahoma tornados and extreme summer heat (laughter).”

Extremely involved at OSU, Slevitch has garnered countless memories and experiences during her time as a professor.

“As it comes to my favorite memory at OSU, there are a few,” she said. “I truly enjoy working with students and seeing how our students grow professionally and as individuals while applying theory to the practices we teach them, and I also enjoy helping with our departmental events like Chef’s Events, Wine Forum, etc.”

As she completes her fifteenth year at Oklahoma State, Slevitch is continuing her career in academia. Her latest research project entailed the comparison of virtual reality visualizations with traditional visualizations in hotel settings.

Slevitch says she does miss home but loves the new one she has made in the United States and encourages any student considering moving and studying overseas to do the same.

“Just do it!” she says. “It will take you outside of your comfort zone and will make you grow as a person as well as a better global citizen. You will get a better understanding of other cultures and will start appreciating things you take for granted in the U.S. It will also increase your employability as many companies are looking for hires with international experience.”